On Friday, airport officials briefed City and provincial government on precautionary measures that have been put in place for when the airport will recieve international travellers as per the new regulations under alert level 1.

On Friday, airport officials briefed City and provincial government on precautionary measures that have been put in place.

The Cape Town airport was not as busy as at the start of the year – but it seems to be picking up, as domestic travellers move in and out more frequently. 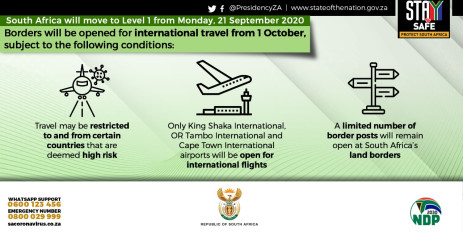 General Manager Deon Cloete said at the airport, there are screens at various service points, COVID-19 monitors on the floor, and social distancing and screening protocols in place.

He said before lockdown the airport would accommodate 35,000 to 40,000 passengers a day.

“We are now back to almost 50 flights a day and that is good. We are probably at around 20% of where we historically were, so we’ve got a long way to go.”

Cloete adds that the number of travellers in the first part of September is as high as last month’s total figure.

MEC for Finance and Economic Opportunities David Maynier said there was no doubt that the Mother City is ready.

“International travellers need to have confidence that we’ve got the relevant health and safety protocols in place so that they can safely in this environment.”

Masuku approaches High Court to have SIU findings set aside

I did nothing wrong, says Bushiri