The total number of deaths since the virus was first detected in South Africa now stands at 15,857 while the recovery rate is now at 89.2% after 586,844 people recovered.

BRITS – The cumulative number of COVID-19 cases in South Africa now stands at 657,627 after 2,055 more infections were recorded in the last 24-hour cycle.

The total number of deaths since the virus was first detected in South Africa now stands at 15,857. 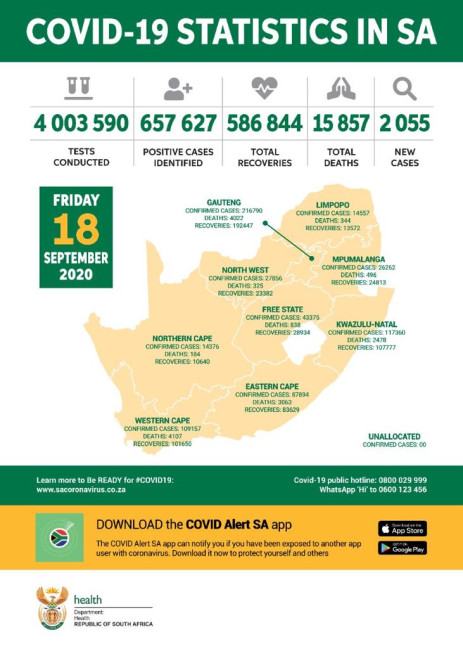 Gauteng has the most fatalities with 62 deaths reported. Nine were recorded in KwaZulu-Natal, seven in the Western Cape, Five in the Eastern Cape and two in the Northern Cape.

Also on Friday, Cooperative Governance and Traditional Affairs Minister Dr Nkosazana Dlamini-Zuma stressed the importance of adhering to the regulations which are aimed at curbing the spread of the virus. 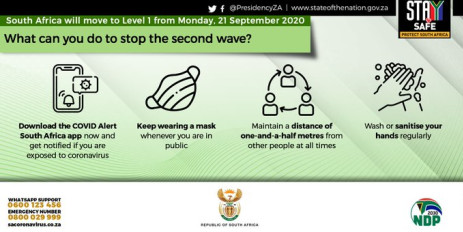 This comes after President Cyril Ramaphosa announced on Wednesday that the country will be moving to alert level 1 of the national lockdown, thus easing many of the restrictions to allow for more economic and social activity.

The relaxation of regulations comes into effect at midnight, on Sunday 20 September 2020. 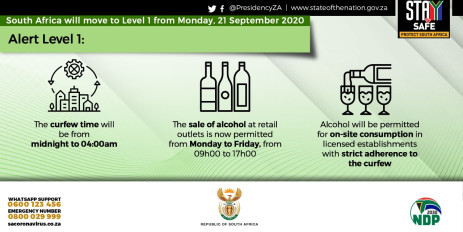 South Africa is preparing to welcome international travellers from 1 October, but Dlamini-Zuma warned that there would be travel restriction on countries experiencing surges in the number of COVID-19 infections. 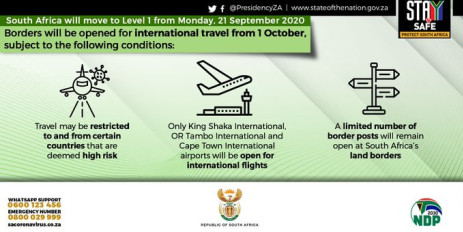 Many countries have reintroduced stricter measures to control a second, in most cases, more severe wave of infections.

Earlier this week, the World Health Organization warned that Europe will face a rising death toll from the coronavirus during the autumn months as the number of daily infections around the world reached a record high.

Israel was among the countries battling a new spike, announcing a three-week lockdown from Friday when people will not be allowed more than 500 metres from their homes.