SA moves to alert level 1, curfew now from midnight to 4 am

President Cyril Ramaphosa has announced that the move will take effect from midnight this Sunday.

JOHANNESBURG – South Africa has moved to alert level one.

President Cyril Ramaphosa has announced that the move will take effect from midnight this Sunday.

This move recognises that the levels of infections are relatively low and that there is sufficient capacity in the country’s health system to manage the current need.

Ramaphosa has addressed the nation on developments in the country’s risk-adjusted response to the COVID-19 pandemic, following consultations with provincial and local government representatives.

He said government was drawing on the advice of scientists and engagements with various stakeholders.

Ramaphosa said by standing together and remaining resolute, South Africa has withstood the storm and succeeded in overcoming the worst phase of the epidemic while protecting the capacity of the health system.

He has applauded South Africans for this achievement and for the thousands of lives saved through our collective efforts.

The curfew has been moved from midnight to 4 am. 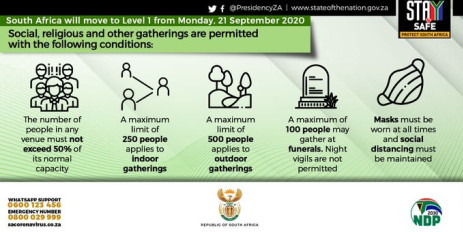